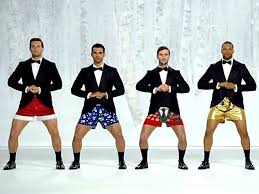 This has to be one of the most interesting commercials I have ever seen. I sat and watched a dozen times before I realized that I didn’t want to even admit that I had seen it.  A new Kmart commercial that depicts a group of men in boxer shorts shaking their boxer shorts to a commonly sung Christmas carol has some viewer’s wondering “What is next?”. The commercial, dubbed “Show Your Joe,” begins with a wide angle shot of six men, who appear to be dressed in tuxedos, standing behind a curtain while ringing bells. However, a few seconds into the clip the curtain is whisked away, revealing the men’s bottoms are clad in Joe Boxer underwear. Watch the video and then read some of the comments I personally have had mentioned to me. This is unbelievable. #showyourjoe

Me: No comment. I’m still trying to pretend I never saw it …

From a close relative: ” I saw this last night and I laughed till I cried, can’t believe it’s Kmart.
My son’s  friend was here and he asked, “are they wearing bells? I retorted “You mean yours don’t sound like that?” That child may never come back here.”

From another relative: ” Happened it see this commercial when I was watching TV with 3 of my children , all under 14 years old. The 4-year-old was really captivated by this commercial and turned to me and wanted to know where the bells were hidden. She kept studying the men and couldn’t see the bells. The 13-year-old said “they are in their shorts”. That’s when it really got interesting. When I recovered enough to respond I simply said that the bells were in the background and they weren’t attached to anything. This explanation seemed to tide the 4-year-old over but the only response from the 13-year-old was “SURE MOM”. Meanwhile each time it comes on, the little one still keeps looking for the bells. What’s a Mom to do?”

From my Dad who never watches any commercials: “Guess I did watch this one… don’t think it’s very tasteful … I hope the great-grandchildren don’t see it.”

Funny or offensive? Viewers are mixed when it comes to Kmart’s new holiday commercial. What do you think? Too cute or too much?

Apparently this isn’t the first time Kmart made an ad that caused controversy or raised eyebrows. Watch this ad from earlier this year, It was clearly made to cause a reaction and once again, just how tasteful is this ad? Watch it and comment if you like. #shipyourpants

OK Kmart wins. The ads are getting great reactions from the public even if they are negative. The whole point of advertisments is to get people to watch them and to remember who the retailer is. All these new ads do that. Here’s yet another clever play on words that is getting a lot of attention. Latest @Kmart viral hit #biggassavings