Warning: Declaration of jwSlidesPost::column($columns) should be compatible with jwCustomPost::column() in /home/customer/www/iyiyii.com/public_html/wp-content/themes/flyingnews/framework/custom_posts/slides.php on line 60
 Windows XP SP3 and Office 2003 Ends Support | iyiyii the blog magazine for everyone 
Warning: count(): Parameter must be an array or an object that implements Countable in /home/customer/www/iyiyii.com/public_html/wp-content/plugins/wordpress-meta-keywords/wordpress-meta-keywords.php on line 50

Home
Warning: sizeof(): Parameter must be an array or an object that implements Countable in /home/customer/www/iyiyii.com/public_html/wp-content/themes/flyingnews/framework/lib/class_breadcrumbs.php on line 102
TechnologyWindows XP SP3 and Office 2003 Ends Support 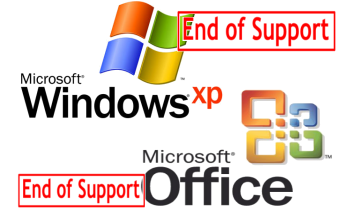 Microsoft said in the blog post that it doesn’t recommend that Windows XP users wait to upgrade, and that it is important for companies to complete deployment before support runs out. IT leaders and endpoint computing managers must ensure that they will either be off these products, or that they have considered the risks of continuing to run them.

ObjectStorm wants to help you avoid the risk of running an unsupported version of Windows and Office, and to assist with your IT planning for 2013. Since these systems will no longer be supported after April 8, 2014, they represent a significant security risk to organizations using them. We recommend organizations inventory their systems to determine if the products noted above are still in use. Organizations should then develop proper migration plans to upgrade the operating systems and applications to supported products such as Windows 7 or Windows 8 and Office 2007 or 2010 as soon as possible.