Warning: Declaration of jwSlidesPost::column($columns) should be compatible with jwCustomPost::column() in /home/customer/www/iyiyii.com/public_html/wp-content/themes/flyingnews/framework/custom_posts/slides.php on line 60
 Trees by Joyce Kilmer | iyiyii the blog magazine for everyone 
Warning: count(): Parameter must be an array or an object that implements Countable in /home/customer/www/iyiyii.com/public_html/wp-content/plugins/wordpress-meta-keywords/wordpress-meta-keywords.php on line 50

Home
Warning: sizeof(): Parameter must be an array or an object that implements Countable in /home/customer/www/iyiyii.com/public_html/wp-content/themes/flyingnews/framework/lib/class_breadcrumbs.php on line 102
LifestyleTrees by Joyce Kilmer 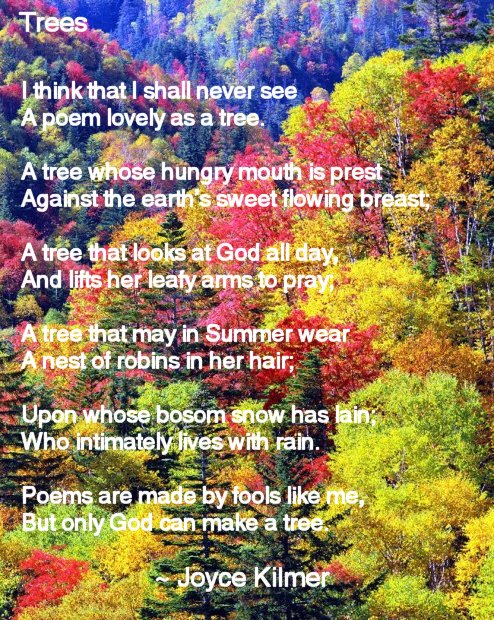 I was in the yard admiring my Japanese Maple Trees and mentioned to my Dad how wonderful the trees made me feel. He then recited a poem he had heard long ago and I was so touched that I wanted to share it.

Joyce Kilmer (born as Alfred Joyce Kilmer; 6 December 1886 – 30 July 1918) was an American writer and poet mainly remembered for a short poem titled “Trees” (1913), which was published in the collection Trees and Other Poems in 1914. Kilmer was also a journalist, literary critic, lecturer, and editor. While most of his works are largely unknown, a select few of his poems remain popular and are published frequently in anthologies. Several critics—including both Kilmer’s contemporaries and modern scholars—have disparaged Kilmer’s work as being too simple, overly sentimental, and suggested that his style was far too traditional, even archaic. Many writers, including notably Ogden Nash, have parodied Kilmer’s work and style—as attested by the many parodies of “Trees”.

At the time of his deployment to Europe during World War I, he was deployed to France with the 69th Infantry Regiment (the famous “Fighting 69th”) in 1917. He was killed by a sniper’s bullet at the Second Battle of the Marne in 1918 at the age of 31.