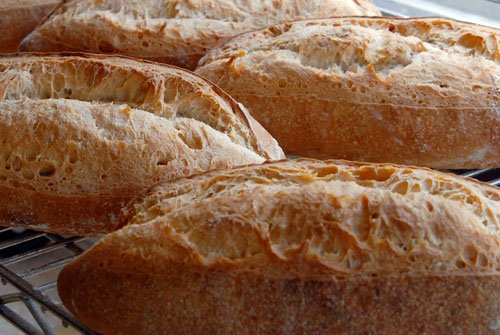 This recipe uses the starter culture that I originally picked up in the Early 1970s in San Francisco. It produces a very nice moderately sour San Francisco Style Sourdough bread loaf. The bread can be made in many shapes, depending on your desires and tastes. The more surface area your bread has, the faster it will go stale. A round loaf or pan loaf will last the best, with a baguette lasting the least well. Unlike most San Francisco sourdough recipes I’ve seen, I use part whole wheat flour. It makes the bread more interesting in color, texture, and taste:

The smell of baking bread is indescribable. I have been baking bread forever it seems. I never get tired of the smell or taste of homemade bread.
Ingredients
Instructions
Notes
I often vary this recipe by letting the bread rise once in a mixing bowl, punching it down, kneading it some more, and then forming loaves. The second rise takes about ½ as long as the first rise, and also adds to the flavor.
3.2.2124